Use of Allergen Extracts > Dosing

To date, only a handful of allergens have been evaluated in controlled clinical trials for the determination of effective doses. The majority of these studies were done in Europe using different extract formulations with potency determined by Major Allergen measurement. Comparative efficacy across standards was established by determining the common major allergen content of similar extracts.

ALK was involved in many of these European studies and in the U.S. used the same major allergen assays to extrapolate effective standardized doses of American extracts.

For example, it was determined in European clinical trials that aconcentration of 10-20 g of Phl p 5 in Timothy grass (Phleum pratense) extract provided a therapeutic dose. If we analyze the 100,000 BAU Timothy grass in the U.S. using the same assay and determine that it has an average Phl p 5 concentration of 675 g, then we can calculate an equivalent dose in BAU. In this case it was determined to be 1000 – 4000 BAU, as reported in Allergen Immunotherapy Practice parameters.

For non-standardized extracts, since there is much more variability in potency than with standardized extracts, it is more difficult to determine a precise dose. It is generally recommended that a target dose between 1:100 – 1:200 w/v be given. This translates into a 10-fold dilution from the concentrate.

Among highly sensitive patients, these doses may not be achievable. In these cases, the highest tolerated dose should be used as the therapeutic dose.

The recent Allergen Immunotherapy Practice Parameters (2011) provide a table of probable effective doses for some of the more commonly treated allergens. The following examples were adapted from these guidelines: 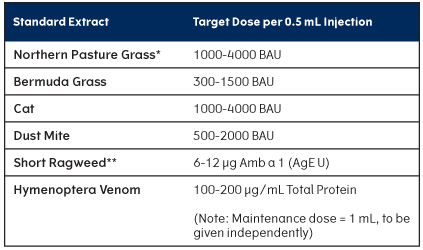 Once you know what concentration you should target with each allergen in your treatment vial, the next step is to figure out how to dilute the concentrates to achieve this value.

Dose Calculations for the Maintenance Vial